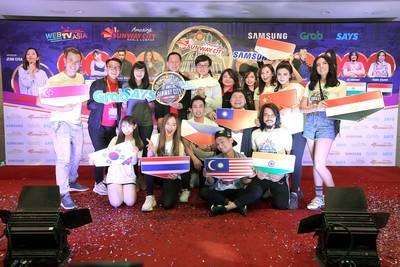 The influencers, who have a following of more than 25 million collectively, will battle across Sunway City’s key locations to win bragging rights as the champion of The Amazing Sunway City Challenge, RM25,000 worth of Sunway Pals Points and the new Samsung Galaxy Note9.

Malaysia’s exceptionally funny and multi-talented Jenn Chia will be hosting the show.

Sunway Shopping Malls and Theme Parks chief executive officer, HC Chan said, “Viewers will be able to explore Sunway City Kuala Lumpur’s attractions through videos and social media postings and be wildly entertained by the battling influencers. Viewers also get to participate in contests that will be launched throughout the four webisodes. As more of our lives get connected online, social media’s inherent ability to transcend boundaries allows us to bring the world a little closer.”

WebTVAsia founder and group CEO, Fred Chong said, “This is one of the most interesting reality shows that WebTVAsia has ever created as it brings some of our most popular influencers from all over Asia together in one of the most exciting destinations in Malaysia.”

As a hint to what viewers can expect, he explained that the influencers will undertake challenging activities involving Vuvuzela, the world’s largest water ride in Sunway Lagoon, and battling it out in Sunway Pyramid’s ice skating rink, among other excitements.

The Amazing Sunway City Challenge is also sponsored by Samsung Electronics Malaysia and Grab Malaysia. The four webisodes will air February 2019. The show will be aired on SAYS.com, the official web broadcaster, Sunway City and WebTVAsia’s official social media platforms as well as other social media channels across the region.