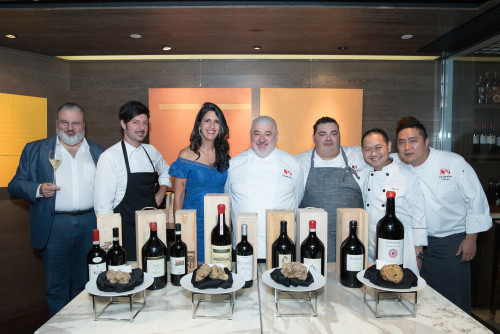 The highlight of the evening was the winning bid of the biggest single white truffle weighting 1kg and 5 grams, sold at HKD1.035 million to a guest from Hong Kong who triumphed over 19 rounds of intense bidding, marking the highest bid in the past 12 years. This year’s splendid white truffle harvest has been rich and bountiful, courtesy of a warmer climate, and more hydrated soils.

The now 89-year-old International Alba White Truffle Fair in Alba, Piedmont is an annual international gastronomic celebration of the region’s white truffle harvest. During the festival, the Alba White Truffle World Auction is held on the second Sunday of November at Castello di Grinzane Cavour, a historic 13th century castle located amidst a UNESCO heritage site. This year as usual, 8½ Otto e Mezzo Bombana – the only three Michelin-starred ristorante Italiano outside of Italy, also livestreamed the auction during the ristorante’s charity dinner gala, and donated 100% of the proceeds to Mother’s Choice for the people in need. The white truffle auction this year was also conducted live in Alba, Moscow, Singapore and Hong Kong.

Originated from Alba, Piedmont, Tuber Magnatum Pico is the most fragrant fungus among all varieties. Due to its unique, piquant and stimulating scents, Alba white truffle is often considered as a supreme and delectable ingredient internationally, and is famously crowned as “white diamond of the table”. The rare white truffle cannot be cultivated, and can only be foraged in the wild from October to December. The precious ingredient’s scarce and ephemeral qualities make it a rare luxury commodity, and a precious treasure for chefs to appeal epicureans all around the world.

The charity dinner menu is as follows: