BATAM, INDONESIA – Media OutReach – April 16, 2019 – PT Pollux Properti Indonesia Tbk (POLL), has advanced its position as a trusted developer in Indonesia as it continued to consistently complete the construction of its project portfolios in a good and timely manner. 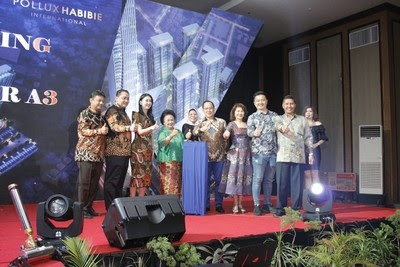 Adding to the register of on-schedule project milestones in Phase one of the Meisterstadt Batam mega-block construction project is Tower A3. The topping-off of Tower A3 follows closely after the topping off ceremonies for Tower A1 and A2 in mid-January and March 2019 respectively.

“The topping off of Tower A3 represents our commitment to develop the Meisterstadt Batam mega-block area as a whole, on schedule — as was also demonstrated with Tower A2 a month ago,” said Po Sun Kok, President Commissioner of PT Pollux Properti Indonesia Tbk.

The topping off ceremony was held last Wednesday on 10 April at Swiss – Belhotel Harbor Bay, Batam and was attended by the Board of Directors and Board of Commissioners of PT Pollux Barelang Megasuperblok and PT Pollux Properti Indonesia Tbk.

PT Pollux Barelang Megasuperblok, or commonly known as Pollux Habibie International, is a collaboration between PT Pollux Properti Indonesia Tbk. and the family of former President of Indonesia, B.J. Habibie.

Mr. Po shared that in addition to timely project developments, the company is also committed to upholding a high standard of quality, as shown by its selection of construction partners.

“We are collaborating with PT PP (Persero) Tbk. — a company renowned for their quality materials, while elevators and escalators will be supplied by KONE, a world market-leader in this business, “said Mr. Po.

The symbolic topping off ceremony of Tower A3 was held concurrently with a VVIP Investor Gathering.

Official Marketing of Tower A5

At the event, Maikel Tanuwidjaya, Sales and Marketing Director of PT Pollux Properti Indonesia Tbk., also provided a preview to Tower A5 — the fourth tower to be developed in the first phase of the mega-block construction project.

“Unlike other towers, Tower A5 will be offered on a more exclusive basis. We believe this tower will win the hearts of our investors and clients. Response has been overwhelming and it’s been oversubscribed twice over since it was marketed last month,” explained Maikel Tanuwidjaya.

The Meisterstadt mega superblok is a ​​9-hectare multi-functional development project. It will feature 11 skyscrapers, including 8 apartment towers with 6500 units, a hotel, an international hospital, malls, shops and an office tower with a plan of 100 floors. The gross project development cost exceeds US$800 million, making it potentially the largest project in Batam. The area is designed with reference to a standard German city which integrates apartment buildings with offices and hospitals.

“Meisterstadt was built with the aim of creating a world-class commercial area that supports the activities of the Asian free trade zone for the city of Batam,” said Maikel Tanuwidjaya.

“This project is a result of Habibie’s vision to create a vertically-integrated city inspired by the standard of progress of the German state,” said Ilham Akbar Habibie, President Commissioner of Pollux Habibie International.

It has been consistently named as one of the best property developers in Indonesia (BCI Asia in 2015, 2017 and 2018), recognised for its strong business performance, growth, sustainability and business value.

Pollux Properti was listed on the Indonesia Stock Exchange on July 11, 2018 (“POLL”), making it one of the 10 largest property developers in the country, with a market capital of 1 Billion USD as of December 31, 2018.