SINGAPORE – Media OutReach – 14 October 2019 – Denzy Gelato, a new and recently opened gelateria, was announced as the winner of the inaugural Singapore Gelato Championship on 28 August 2019, earning the prestigious title of “Singapore’s Best Gelato”. 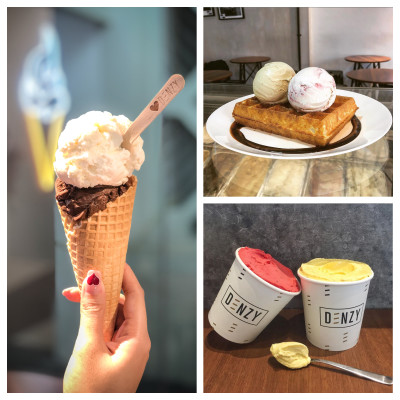 Organized by the Dessert Association Singapore (DAS) along with Reed Exhibitions, this competition was held to further spread the culture of gelato island-wide, with aims to incite creativity and professionalism in the industry by showcasing Singapore’s finest gelato craftsman. Contestants enrolled into the competition by invite only and were required to present one signature flavor of their choice, to be evaluated based on its taste, structure and presentation.

The award recognized Denzy Gelato’s innovative craftsmanship and creation, the Pear, Ginger and Ginger flower. Interestingly, as the name suggests, one would be able to taste the pear, ginger, followed by ginger flower in that order as well.

Determined to compete and win using a unique flavor created based on exotic local ingredients this time, owner Damien pushed ahead with the Pear, Ginger and Ginger flower sorbet, crediting part of his imagination to a time in his youth where he observed his father using the ginger flower to prepare Chinese rojak for their customers.

Being the only contestant to present a sorbet instead of gelato, this light, refreshing creation with a soothing aftertaste surely did not disappoint when it brought home the gold.

Denzy Gelato’s popular flavors include the Persian Prince, Elderflower Mojito and Skinny Dark Chocolate, some of which were inspired by Damien’s time spent overseas.

Persian Prince is an Italy-inspired flavor infused with almond and saffron, gifting it with a nutty and interesting taste. The almonds used are also stone-grinded for 10 hours prior, adding to the authenticity of the flavor.

The Bali-inspired Elderflower Mojito, contrary to what the name suggests, is actually non-alcoholic and refreshing, perfect for Singapore’s humid weather. Only mint and lime are kept in the ingredients, coupled with a carefully boiled Elderflower in order to extract its genuine taste.

The Skinny Dark Chocolate, which is also a vegan option, appeals to people who fancy dark chocolate but favor the non-creamy and delectably light texture of a sorbet.