BONN, GERMANY – Media OutReach – 7 November 2019 – From November 7 through 10, 2019, Beijing will be hosting the top-flight esports event — the Intel Extreme Masters (IEM). Eight of the best teams in the world will be competing in the tactical shooter Counter-Strike: Global Offensive (CS:GO). As Official Logistics Partner of ESL, of which the IEM is part, DHL is responsible for the event logistics in Beijing. This includes transporting all of the stage equipment as well as the teams’ gaming chairs, for example. 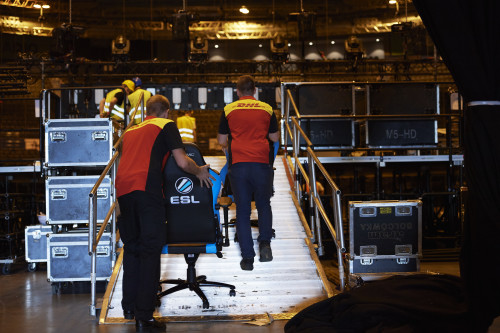 “We are proud to be able to play our part in the first stand-alone IEM tournament in China as a partner, helping to deliver exciting esports moments.” says Arjan Sissing, Head of Brand Marketing at DHL. “The demands placed on the top players are immense, and to reach the apex of their game they require extreme concentration, tactical and teamwork skills. It is precisely this combination of speed, precision and passion which reflects DHL’s values.”

IEM Beijing-Haidian 2019 will be held at the Beijing University Students’ Gymnasium of Capital University of Physical Education and Sports. The tournament is being co-hosted by Intel and the world’s largest esports company, ESL. Having taken its first steps into China in 2009, the Intel Extreme Masters is celebrating its tenth anniversary in the country in this year. It is also the first time that IEM is being held as a stand-alone event in China. Last year it was part of the China Digital Entertainment Expo & Conference (ChinaJoy) in Shanghai. The winning team in the final on November 10 will take home US$250,000 in prize money and will also earn a point toward the Intel Grand Slam, with a prize pot of US$1 million at stake.

As part of its partnership with ESL, DHL is transporting a total of 770 tons of stage equipment and 1,050 gaming chairs to the seven venues in Europe, the US and Asia in 2019, covering a distance of 44,500 kilometers. Together, the monitors being transported cover an area of almost 4,500 square meters — the equivalent of eleven basketball courts.

“Every tournament location has its unique challenges and requirements to which logistics must be precisely tailored. That is why DHL is the Official Logistics Partner of ESL, drawing on decades of expertise in event logistics to deliver amazing esports experiences for fans around the world,” added Sissing.

In addition to its partnership with ESL, DHL has a host of top-class partners in sports, lifestyle, fashion and culture. These include Formula 1 and Formula E, football clubs such as FC Bayern Munich and Manchester United, the Rugby World Cup 2019, and also a number of Fashion Weeks and Leipzig’s renowned Gewandhausorchester.

You can find the press release for download as well as further information on dpdhl.com/pressreleases