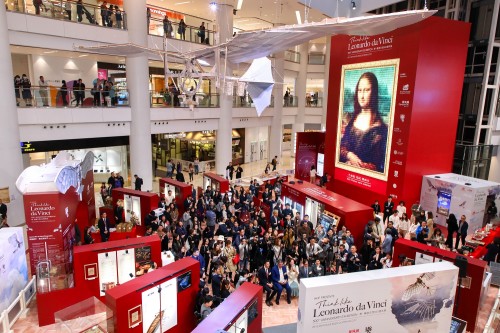 HONG KONG, CHINA – Media OutReach – 17 December 2019 – It was 500 years ago when Leonardo da Vinci, seen today as the greatest polymath in human history, left behind his legacy. In commemoration of the Renaissance master, elaborate exhibitions and events are being held this year in different parts of the world. In Hong Kong, the Hong Kong Innovation Foundation and Sino Group have partnered with Italian international museum Leonardo3 Museum (L3) to bring its world-class travelling exhibition to Sino Group’s Olympian City shopping centre. Entitled “Think Like Leonardo da Vinci 500th Anniversary Exhibition”, the Hong Kong event is the first large-scale thematic exhibition L3 has staged in Asia, and is designed and curated following high museum standards to recreate the mind-boggling world of the great Italian inventor and artist.

With remarkable accomplishments in multiple disciplines spanning both science and art, Leonardo da Vinci can be viewed as a pioneer of STEAM (Science, Technology, Engineering, Art and Mathematics) education, whose avant-garde ideas had inspired generations that followed. Committed to promoting his innovative spirit, L3 devotes itself to the study of da Vinci’s inventive concepts through research, analysis and translation of his original manuscripts and drawings. The museum also endeavours to bring these concepts to life by recreating da Vinci’s machines and art with scientific methods and state-of-the-art technology, together with immersive and interactive experiences for the audience.

In the past, L3 had brought its touring exhibitions to the United States, Turkey, Germany, Poland and Canada, among other countries. Unlike these previous exhibitions, which were held in either traditional museums or art galleries, the Hong Kong edition will be staged at Olympian City has organized a variety of large-scale STEM programmes, which, combined with arts and cultural activities, have helped to popularize STEAM education. It is the ideal of promoting new and fresh ideas that has brought Olympian City and L3 together to organize the touring exhibition in Hong Kong, which will also be the first time for precious exhibits and interactive installations from the museum’s collection to be showcased inside a shopping centre.

Themed “Think Like Leonardo da Vinci”, the exhibition at Olympian City thoroughly showcases da Vinci’s ideas, achievements and contributions to human society, encouraging the audience to delve into the amazing universe of the celebrated genius. In addition to fascinating machines built by L3 based on da Vinci’s ideas and over 1,000 digitized manuscripts and interactive drawings, the distinctive event features a host of new multi-sensory experiences especially designed for this occasion.

Ms Nikki Ng, Deputy Chairman of the Hong Kong Innovation Foundation, said, “Established to support the development of the innovation and technology (I&T) sector and promote the spirit of innovation, the Hong Kong Innovation Foundation provides platforms for the local public to deepen their understanding on I&T and foster Hong Kong’s development in this area. Leonardo da Vinci, who is heralded as the greatest polymath the planet has ever seen and a pioneer of STEAM development, has left a far-reaching impact on the world with his forward thinking and brilliant ideas. We are honoured to collaborate with L3 to bring an internationally renowned exhibition devoted to this Italian master to Hong Kong. By showcasing machines built from da Vinci’s concepts and providing interactive experiences, the exhibition is expected to not only inspire Hong Kong people but also help encourage I&T development in our city.”

Mr. Mario Taddei, Co-founder and Co-technical Director of L3, said, “L3 is devoted to the study of Leonardo da Vinci’s ingenious ideas and sharing his innovative spirit with the world. In a similar vein, the Hong Kong Innovation Foundation and Sino Group’s Olympian City are dedicated to popularizing STEM education, with proven success in the various programmes they have implemented. Sharing the same ideal of promoting innovation, L3 is partnering with the two organizations to bring the touring exhibition, which has already travelled to France, Italy and the US, to Hong Kong as its first Asian stop. We are certain the event will showcase the innovative spirit of da Vinci to the people of Hong Kong, and hope that it will pave the way for exhibitions in other Asian cities.”

Leonardo da Vinci was not only a celebrated scientist and painter, but also an architect, engineer, mathematician and even musician, with achievements in many different disciplines. Through the interactive Codex Atlanticus and Codex on Flight at the exhibition, the audience will be able to grasp more easily the concepts behind Leonardo da Vinci’s multifarious inventions, presented through L3’s digitized manuscripts and drawings, advanced technology and three-dimensional images.

The Codex Atlanticus is the world’s most comprehensive compilation of illustrations made by da Vinci. It covers a wide range of contents, from natural science to architecture, technology and music. Meanwhile, the Codex on Flight includes da Vinci’s observations and concepts that had contributed to the invention of human flight in the early 20th century.

The exhibition will also display mechanical models of da Vinci’s flying machine, architectural structures, musical instruments, ships, transportations and other conceptual designs that have inspired inventions in the generations after him.

Highlights of the Exhibition

(1)    Smile like Mona Lisa for charity and a better world

Mona Lisa is the most famous painting of Leonardo da Vinci and arguably the most famous oil painting and portrait in the world. The mysterious smile of Mona Lisa has captivated art historians and laymen alike.

Through an interactive installation, the exhibition will unveil the secrets behind this acclaimed masterpiece. Visitors are also invited to take a snap at the “My MONA LISA Smile” photo area. In addition to transforming into Mona Lisa, visitors can become part of the interactive Mona Lisa mosaic displayed on the mega screen at Olympian City. Furthermore, Sino Group will donate HK$5 for each photo taken at the photo area to local charity Smile with Us HK.

The Last Supper is an extraordinary masterpiece because Leonardo did not conform to the traditional technique of drawing. With his paintbrush, he created new and unprecedented aesthetic standards. For example, the window on the left side of the painting is relatively short in real life, but, considering that viewers would more often than not raise their heads to look at the painting, he painted the window much taller than its original normal ratio in order to achieve a visual aesthetic and a visual balance.  Leonardo was also very particular with pigments.  In order to express a unique amber colour, he experimented with various materials.  For instance, he used egg yolks as a pigment and therefore created tempera.

At the exhibition, visitors can participate in a VR experience of the widely researched painting to find out about the drawing techniques and hidden messages behind the masterpiece.

Referring to ancient Roman architect Vitruvius’ theories on architectural golden proportions, which proposed that every part of the human body should correspond to the architecture of the time and maintain reasonable ratios, da Vinci illustrated an adult male in the nude posing in two overlapping poses, with the limbs stretched out to touch a circle and made to fit within a square made up of sixty-four smaller squares. After some calculations, the “Ideal Man” with the perfect human body came into being.

At the exhibition, visitors can compare their body build to the “Ideal Man” with a body scanner. Those who are found to be the closest fit in the weekly challenges may each receive a HK$200 voucher from an Olympian City merchant.

In addition to appreciating da Vinci’s flying machine and manuscripts, exhibitiongoers can take part in the “Let’s Fly” interactive game, and receive a gift upon completing the flying contest that requires them to control the flight with a sensor. The challenger with the highest score each week may win a HK$200 voucher that can be used at Olympian merchants.

Details of the exhibition