TOKYO, JAPAN – Media OutReach – 10 October 2019 – In a press conference held on September 20, Seiko Watch Corporation announced that Japanese actress Yuki Amami would be appointed as the ambassador in the Asia region for Grand Seiko, a Japanese luxury watch brand sold worldwide. Yuki Amami boasts great popularity in Japan, and is also held in very high regard in Asia such as receiving the Magnolia Award at the Shanghai TV Festival for her role in “BOSS,” a TV series produced in Japan in 2010. The press conference was held in Ginza where Seiko was founded, and Amami, who was appointed as ambassador, appeared in a vivid blue one-piece dress. Amami, who received a bouquet of flowers from Seiko Watch Corporation Chairman & CEO Shinji Hattori, said “it is a great, great honor” to be appointed as Asia ambassador, and radiantly discussed her thoughts about Grand Seiko.

Hattori explained the strategy for Grand Seiko in the Asia region at the start of the press conference and announced a vision for actively expanding with the sales targets of approximately 10 times over the next three years in China and approximately double in Taiwan, in addition to opening China’s first Grand Seiko Boutique in Shanghai in 2020. 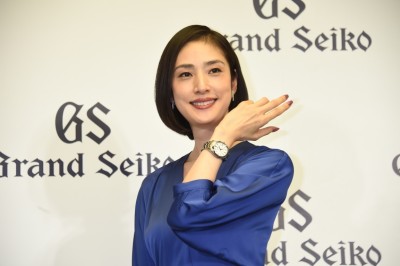 I have been appointed as the Asia Ambassador for Grand Seiko. I would describe Grand Seiko as the “best of the best.” It offers not only performance, but also beauty, and a look that makes you feel that you have improved yourselves. It is a partner that is always beside you. To be frank, I think it would be wonderful if everyone in Asia to wear a Grand Seiko watch. I would like young people to have Grand Seiko to motivate themselves to aim higher, and those who have matured to wear Grand Seiko as a gift to themselves.

Asia is a region with countries very close to Japan, and I feel that the cultures and peoples’ thoughts have something in common. Also, every country is beautiful, has delicious food and can be enjoyed with all five senses. I would like to see Asia and Japan stimulate each other.

A photo shoot was held for poster and SNS in the Asia region. The shoot covered situations in morning, day and night, and they all look very good. It was an enjoyable shoot with the team focusing on how to show the world of Grand Seiko. I would appreciate it if you could take a look. (* Theses SNS advertising images have been published on the Weibo Seiko official account since September 23.)

(Left)Amami receiving a bouquet of flowers from Hattori
(Right) Wako, where the press conference was held, is a symbol of Ginza at the center of Tokyo 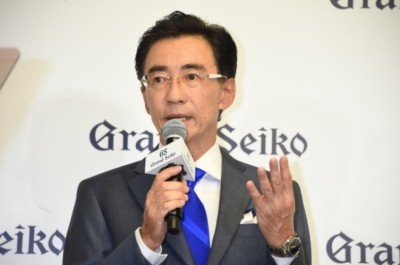 Hattori talking about Grand Seiko’s strategy in the Asia region

Grand Seiko was launched globally in 2010. Since it became independent from the Seiko brand in 2017, it has rapidly gained recognition as a luxury watch brand worldwide.

Its features are precision, beauty and ease of use. It is true “manufacture” where the company handles everything from design of the movement to the development of component materials to manufacture, assembly and adjustment, and combines the latest technology and the highest level of craftsmanship.

A unique aesthetic reflecting the Japanese sensitivity of time is also seen throughout the design. 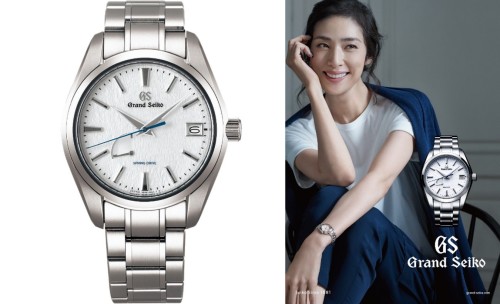 (Left) The popular “Snowflake” model (SBGA211) with a dial inspired by the winter scenery in Shinshu region, where the watch is made.
(Right) Advertising visual for the Asia region

* Video of the press conference can be seen at the link below.