TOKYO, JAPAN – Media OutReach – 8 July 2019 – Japanese trade looks to stagnate in the coming quarter for the first time since 2015, according to data from the DHL Global Trade Barometer (“GTB” or the “Barometer”). The GTB, an early indicator of global trade developments calculated using artificial intelligence and big data, suggests that the downward trend for Japan’s trade growth will accelerate between June and August 2019, dropping seven points to an overall index value of 50. [1] 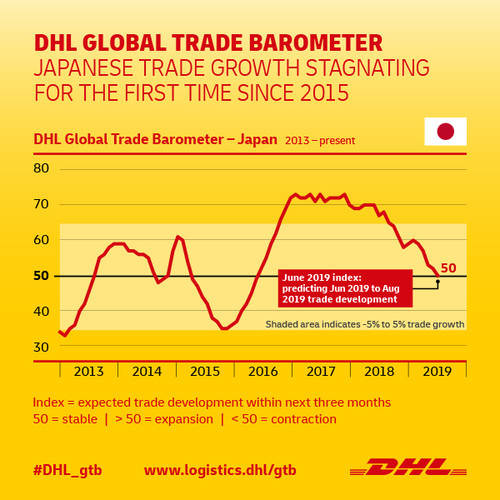 “Japan’s exposure to both sides of the ongoing US-China trade dispute appears to be taking a rising toll on its own trade outlook, with exports to China alone falling by 10% in May — causing overall exports to drop by nearly 8% as imports experienced a decline after unexpected growth in April,” said Charles Kaufmann, CEO North Asia South Pacific, DHL Global Forwarding and President/Representative Director, DHL Global Forwarding Japan K.K. “Ongoing volatility and uncertainty in global trade conditions, coupled with indirect exposure to the tariffs being wielded in the US-China dispute, have created conditions where Japan’s key manufacturing industries are exercising more caution than ever before.”

Both air and ocean trade volumes are expected to decelerate to near-zero growth, with exports from Capital Equipment and Machinery, High Technology, Chemicals and Products and Machinery Parts for air exports, and Industrial Raw Materials and Land Vehicles & Parts for ocean exports, displaying the only significant gains.[2] Air exports remain relatively strong, even as the overall air trade outlook fell by 11 points to 50 due to a fall in air imports, while ocean trade looks set to contract with an index of 49 points.

For the first time since its launch in 2018, the Barometer’s results predict a slight decline in global trade in the three-month period ending in August 2019, with its overall world trade outlook dropping to just 48 index points.

Commenting on the latest forecast, Tim Scharwath, CEO of DHL Global Forwarding, Freight, said, “Amidst rising US-Chinese tensions, the slightly negative outlook for global trade for the third quarter of 2019 does not come as a complete surprise. The latest GTB clearly illustrates why trade disputes create no winners. Nevertheless, some major economies such as Germany continue to record positive trade growth. And from a year-to-date perspective, world trade growth has still been positive. Hence, we remain confident in our initial prognosis that 2019 will be a year with overall positive, but slower trade growth.”

The continued trade disputes between the US and China have contributed significantly to that decline, with both countries experiencing the largest contraction in their trade outlook (-11 points for the US, -7 points for China) out of all countries surveyed by the Barometer.

Scharwath added, “The GTB is a useful tool for us to anticipate economic developments at an early stage. We are well-prepared to tackle the forecasted developments. Our divisional structure and portfolio as well as our worldwide activities allow us to balance economic effects within the company and remain resilient to changes in global trade dynamics.”

[1] In the Global Trade Barometer methodology, an index value above 50 indicates positive growth, while values below 50 indicate contraction.

[2] Click here for more information on the outlook for air freight and ocean freight or the key sectors in Japan.