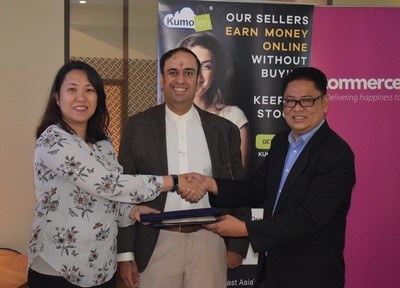 Late last year, Kumoten achieved another milestone when its founders, brothers Isaac Leong and Leong Yew Meng, closed a round of pre-Series A equity funding, led by Cradle Fund.

Kumoten’s first venture capitalist, Commerce DotAsia Ventures Sdn Bhd (Commerce.Asia), came in at Kumoten’s seed stage in 2017. At that time, Commerce.Asia’s Founder and Executive Chairman Ganesh Kumar Bangah mentored the company and helped it grow under Commerce.Asia’s GrowthX Market Acceleration Program, a programme licensed from Silicon Valley. Since then, Kumoten has grown its active user base by more than seven times.

Commerce.Asia strengthened its support for Kumoten when it joined the round of investment in late 2018 together with the Cradle Fund. The majority of the funds from this recent equity round will help Kumoten expand its product research and development team and talent acquisition. It also plans to launch local dropshipping sites in Indonesia, Philippines and Thailand and extend its marketing activities to attract users from these new markets.

“As the Chinese saying goes, it’s a case of the right people being in the right place at the right time,” says Kumoten’s CEO Isaac Leong about the strong investor confidence that the company has inspired. “Malaysia and South East Asia are experiencing rapid growth in e-commerce. And Malaysia has one of the best infrastructure in the region for e-commerce growth.”

In addition, Kumoten has shown a strong product-market fit proven by its impressive growth in its active user base as well as in its gross merchandise volume–which has grown by five times since May 2018. Its secret to success has been the seller-centred solution it has provided. Kumoten has ultimately improved sellers’ lives by taking away the seller’s biggest pain point–mounting piles of stock in the home or in warehouses, as well as a backed-up cash flow.

The platform takes care of these challenges and creates a more efficient platform that allows users to easily select products and sync product details to online marketplaces such as Lazada and Shopee. “We want online sellers to enjoy selling online and to focus on sales and marketing activities instead of worrying about the cost of investing in stocks, taking product photos and writing product descriptions”. Isaac believes that Kumoten has not only solved a problem faced by Malaysian online sellers but also online sellers from South East Asia, India and the Middle East.

“Most importantly, our investors believe in the founders and our management team’s ability to deliver on our financial goals. It helps that our team is also able to work closely with our investors to achieve greater heights.”

With its healthy track record, Kumoten has won trust from all major online marketplaces in Malaysia such as Lazada, Shopee, Lelong.my and 11Street.my.

In South East Asia, Kumoten is a pioneer in adopting the Automated Dropship system, where users do not have to download or copy and paste product data.

Kumoten provides resellers with good quality and marketplace-compliant product photos, product descriptions and specifications as well as pricing information such as suggested retail price, cost price, and shipping costs. With the automated system, it just takes a few clicks for users to select and sync products to their online stores.

The system also automatically updates the inventory level of the product, ensuring that out-of-stock items are immediately updated on a user’s online store.

“We wanted to disrupt the conventional business model of “buy-first, sell-later” to “pay-as-you-sell”, thereby removing the risks of keeping stocks. This increases the number of products an entrepreneur can sell online as they do not have to fork out money to buy stocks.”

“We estimate that at least 34 per cent of sellers on major online marketplaces in the region either do not have enough products or have no products of their own to sell” says Isaac of Kumoten’s target audience.

There is no limit to the items a user can select and sync to their online store. “We had a user who synced about 22,000 items to Lazada in July and generated almost RM20,000 worth of sales from his online store in Lazada within a month,” says Isaac.

According to Isaac, e-commerce in South East Asia is growing rapidly but is still considered to be at an early growth stage and that dropshipping complements this growth.

“The potential of dropshipping is in riding the e-commerce growth wave. We estimate by 2020, dropshipping in South East Asia will have a USD7.5 billion market size,” he says. On a daily basis, Kumoten adds 500 – 600 new items to its product list.

Besides the huge market size potential, Isaac also believes that the technology behind dropshipping is underdeveloped, with most players still using a conventional model.

One of Kumoten’s goals is therefore to expand its research and development. Isaac says: “There are many other areas and technology we can develop to bring dropshipping to a higher level. And we hope to be at the forefront of this innovation.”

In 2014, the Leong brothers sought a solution to the business risk faced by e-commerce entrepreneurs, i.e. buying and keeping stocks. “Many first-timers or young entrepreneurs who are inexperienced in selling and managing cash flow and inventories often overlook the risk in e-commerce. They buy stocks from China, with their own savings or with borrowed money, and then realise it’s not so easy to move these products. The unsold stock is then offloaded in marketplaces at a loss, or more often than not, become Christmas presents for the entrepreneurs’ family members and friends. There are also cases where they receive the wrong stock and then have to go through lengthy processes to get an exchange. Many simply end up getting stuck with stock that they did not want,” explains Isaac.

Enter Kumoten. Kumoten, which means ‘cloud shop’ in Japanese, is in the business of dropshipping. This means the company sources for thousands of products and makes these products available for online resellers to select and sync to their online stores in major marketplaces such as Lazada, Shopee, Lelong.my, 11Street.my and many others.

Essentially, Kumoten acts as a curator and stock-keeper of products for the online seller, so that the seller can focus on selling and marketing the products.

Today, Kumoten has grown to be Malaysia’s largest homegrown Dropship Platform carrying more than 100,000 SKUs from a wide range of categories in its online catalogue, sourcing from not just Malaysia but also from China.

Chief Executive Officer Isaac Leong heads Kumoten and is supported by a core management team, which consists of engineers, sales and marketing experts, and retail business owners. Each of the Kumoten founders brings vast industrial and commercial experience from MNC and FMCG landscapes.