Giant Panda with her child, who is aged only 20 days 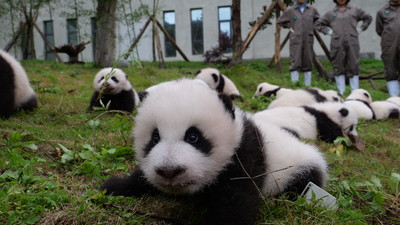 Giant Pandas Showing Up Together at the Shenshuping Base

Featuring a Giant Panda Culture Exhibition Area, the event hosted by Sichuan Province celebrates the preservation of the beloved icon of vulnerable species that has been at play since establishment of Wolong National Nature Reserve in 1958.

Around 200 guests included heads of related ministries and commissions, leaders from the People’s Government of Sichuan Province, diplomatic envoys to China and international friends, officials from the cities, prefectures, and departments and bureaus of Sichuan Province, well-known giant panda experts, celebrities from the culture sector and entrepreneurs.

A light-up map indicated countries where China giant pandas were sent for international exchanges and cooperation.

Certificates and souvenirs were also awarded to ambassadors for the global promotion of Giant Panda culture.

With its eco-environmental achievements in saving the species adopted as an “international business card” for tourism promotion, the event also celebrated Sichuan’s folk customs, culture, art and famously spicy cuisine at a banquet with artistic performances.

The heartening story of saving the Giant Panda is also told through photos, film, TV, virtual reality, research exhibits, works of art and cultural and creative products at a ‘Panda China-Sichuan Theme Exhibition’ open to the public from August 23-26 at The China Millennium Monument in Beijing.

Native to south-central China, Giant Pandas were on the brink of extinction as a result of deforestation of their natural habitat of bamboo forest and poaching until conservation efforts began in Sichuan.

Releasing a new progress report on the conservation campaign, Mr. Yang Chao, Director of the Protection Department of China’s State Forestry and Grassland Administration, said habitat protection has since extended to 67 nature reserves through Sichuan and neighbouring Shaanxi and Gansu — compared to just 13 reserves in 1998.

According to latest estimates, the steadily growing wild population has reached 1,864 individuals.

Another 518 are in captivity worldwide — representing a “healthy, sustainable breeding population”.

As the State Forestry Administration of China continues to reinforce conservation efforts for one of the worlds’ most adored and protected rare animals, the Giant Panda is one of the few species with its natural habitat designated a UNESCO World Heritage Site. The Sichuan Giant Panda Sanctuaries covering seven natural reserves were inscribed onto the World Heritage List in 2006.

Mr. Yang Chao, Director of the Protection Department of China’s State Forestry and Grassland Administration said ‘Panda Week’ is in future scheduled on the environmental calendar as a biennial international celebration of China’s 50 years of conservation efforts saving the icon of vulnerable species.

Gifts of giant pandas to foreign zoos marked some of the first cultural exchanges between China and the western world in the 1970s — known as “panda diplomacy”.

Director Yang added: “After much hard work and effort, conservation efforts have yielded significant results in multiple avenues. Saving the Giant Panda has served as a benchmark for respecting China’s natural environment.”

In 2017, a newly-amended Law of the People’s Republic of China on the Protection of Wildlife further strengthened protection of endangered species such as the Giant Panda by reinforcing measures to preserve natural forests and build protective areas for wildlife and plants.

Giant Panda habitats are some of the most biologically diverse in the world, with panda conservation benefiting the entire eco-system of reserves, preserving more than 8,000 species of wild animals and plants.

“To preserve the panda and its natural habitat is to reap all of the ecological, societal and economic benefits associated with it,” Director Yang said.

As well as loss of habitat, the Giant Panda’s survival has been additionally hindered by a curious lack of libido, brief breeding season, low fertility and poor survival rate of cubs.

China has so far bred 63 Giant Panda cubs through artificial insemination, with 58 surviving. “By the end of 2017, the captive Giant Panda population reached 518, achieving basic self-sustainment,” he said

As a result of conservation success, the International Union for Conservation of Nature reclassified the species in 2016 from endangered — meaning threatened with extinction — to ‘conservational-reliant vulnerable’, indicating positive population recovery with conservation support.

China is also now embarking on creating a Giant Panda National Park three times the size of Yellowstone National Park in the US protecting 70% of its habitat and 86% of the wild population.

The future of the Giant Panda now seems safely assured, albeit with continued conservation help.

‘China Giant Panda International Culture Week’ is formally launched at the China Millennium Monument in Beijing on August 23, joined by United Nations officials including Mr. Tu Ruihe, China’s representative on the United Nations Environment Programme, foreign envoys and representatives of the World-Wide Fund for Nature (WWF) which has adopted the panda as its symbol, and experts and scholars in panda conservation research.

About the Giant Panda

Native to south-central China, the Giant Panda was on the brink of extinction from deforestation of its natural habitat of bamboo forest and poaching until conservation efforts formally began in 1958 with the establishment of Wolong National Nature Reserve in Sichuan.

Habitat protection has since extended to 67 nature reserves through Sichuan and neighbouring Shaanxi and Gansu — compared to just 13 reserves in 1998.

As a result of conservation success, the species has been reclassified since 2016 from endangered to ‘conservational-reliant vulnerable’ by the International Union for Conservation of Nature.

As the State Forestry Administration of China continues to reinforce conservation efforts for one of the world’s most adored and protected rare animals, the Giant Panda is one of the few species with its natural habitat designated a UNESCO World Heritage Site. The Sichuan Giant Panda Sanctuaries covering seven natural reserves were inscribed onto the World Heritage List in 2006.

China is now embarking on creating a Giant Panda National Park protecting 70% of its habitat and 86% of the wild population by amalgamating and extending reserves in Sichuan, Shaanxi and Gansu.

The park will cover 27,134 square kilometres, three times the area of Yellowstone National Park in the US.

By spanning three provinces, it aims to encourage migration of the species to strengthen its gene pool.

As most of the area is mountainous where residents are poor, it will also enable local governments to alleviate poverty.

A fund of at least 10 billion yuan (US$1.57 billion) will finance a variety of poverty alleviation projects from 2018 to 2023. The programme includes financial assistance, charity foundation, disaster relief, community education, tourism development and ecological construction.

Qumu Shiha, head of a national park working group, called the initiative a “big step to building a moderately well-off society” in the region.

“It will help mobilise the efforts of the whole society into protecting giant pandas, promoting harmony between nature and humans, and exploring a new model to combining environmental protection, financing, poverty reduction and charity care.”