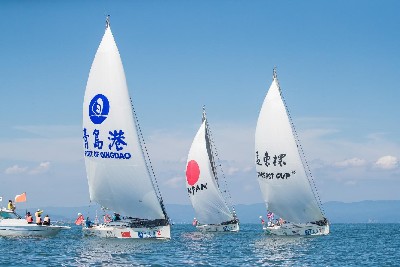 This year’s regatta has embraced a whole upgrade. A new stopover, Toyama in Japan, was set up. Together with Vladivostok in Russia, the total voyage has been extended from 2,000 to 2,300 nautical miles. The “Fareast Cup” will soon come to a successful end as teams are coming back one after another. Team Seven Feet led by Yliya, former 49er member of Russian Sailing Team, with its notable competence, overtakes Team Huayang Sailingin, led by former winner of the Laser Radial World Championship Jim, with 15 points ahead and tops the final scoreboard for the fourth time in a row. The team thus held up high the Silver Cup (56 cm, 13.5kg) by the Fushan Bay. Team WOB, “Langyatai” (Team Qingdao), Team SCO Youth, Team Japan, Team Decision are ranked from the third place to the seventh.

This year has witnessed the dedication of CPC Qingdao Committee and Qingdao government to building a metropolis that is modern, open, dynamic and stylish. The “Fareast Cup” is a representation of this endeavor, said Madam Zang Aimin. “Devoted to promoting sailing events, I believe this complies with the current theme and contributes to the development of a modern, open, dynamic and stylish Qingdao”.