SEOUL, KOREA – Media OutReach – 28 February 2019 – Twitter is the best place for KPop fans to see what’s happening and join global conversations on the latest Kpop news and artists. Twitter will once again collaborate with Rakuten Viki’s publishing arm, Soompi (@soompi), the largest global online community for Korean entertainment, for their 14th annual #SoompiAwards. The #TwitterBestFandom award will continue to recognize the most passionate KPop fandom on Twitter, but in a fresh twist, a new honorary distinction, called the Twitter Rising Fandom Achievement, will also be given out for the biggest increase in vote Tweets compared to last year’s results. Exclusively held on Twitter, the #TwitterBestFandom award will be the only voting to take place on any social media platform for this year’s #SoompiAwards.

In 2018, Twitter users voted for their favourite Korean artists and interacted with each other on the platform, generating over 42 million vote Tweets globally. Eventually, GOT7 (@GOT7Official) and their passionate fans won the #TwitterBestFandom award, successfully clinching the most popular crown for the third year in a row. Check out the heat map below to see the global #TwitterBestFandom conversation during last year’s Soompi Awards.

Heatmap of global #TwitterBestFandom conversations during Soompi Awards in 2018 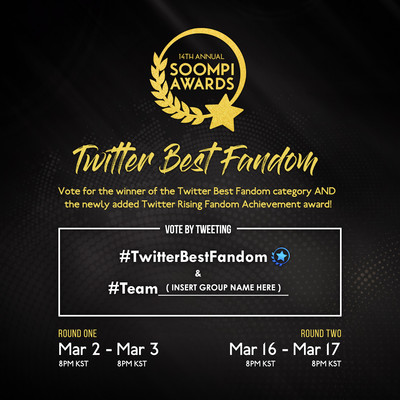 The KPop artist winners of both the #TwitterBestFandom award and Twitter Rising Fandom Achievement will receive their #SoompiAwards trophy and be invited to their own exclusive #TwitterBlueroom allowing them to personally thank their fans and answer their questions, while enabling their fans to congratulate and directly talk to them on Twitter.

Last year, Mamamoo (@RBW_MAMAMOO) participated in a live global conversation with their fans through a #TwitterBlueroom after their nomination in five categories including Album of the Year and Song of the Year.

Twitter also launched two customised emojis for the #SoompiAwards and #TwitterBestFandom hashtags from 27 February to 27 March 2019. If you belong to the global #KPpopTwitter community, join the worldwide Soompi Awards conversations with these two hashtags, while voting and expressing your love for your favourite KPop stars on Twitter!